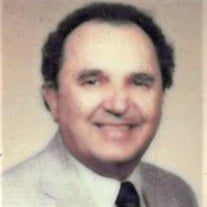 WALTER P. "WINKY" WINCKI, age 94, passed away on Monday, December 27, 2021. Beloved husband of Arlene (nee Szplet), treasured children, the late Cliff, Lauree Bandelow (Rich), and Gary (Kristine). He joins his beloved and faithful mother, Jessie Wojciechowski-Wincki and his step-father Ted Wojciechowski and his deceased brothers William and Raymond. Surviving is his sister, Irene Revak (John, deceased). Walt was an avid sports buff, with baseball being his greatest love. He played in the Cleveland sandlots starting as a young second baseman in Class F (Cleveland News/Fisher Foods league) and progressed to Class A. At the age of 17 he had a tryout with the Cleveland Indians, and upon being drafted in the U. S. Army he played with the 1st Cavalry Division in Japan where he suffered a baseball injury that aborted any future aspirations of continuing in baseball. He enjoyed all facets of sports and played and refereed basketball in high school and amateur games in the Cleveland area. He also enjoyed playing golf, bowling, racquetball and other sports. He loved music and dancing with his beloved spouse. He always felt that his responsibilities of his life did not start until he married his angel (Arlene) in 1958 and the birth of his children in 1959, 1960 and 1966. Philosophically, he felt he was blessed in being in the right place at the right time, which was his philosophy for a good life. After his tour of duty in the Armed Forces, he was employed at U. S. Steel Corporation in Cuyahoga Hts. as a clerk at the time of his marriage. Upon returning from his honeymoon he was laid off. He was then employed at National City Bank (PNC) as a teller. When applying for a house mortgage at United Savings Association in Garfield Hts, he was hired to be a head teller which accelerated to being Escrow, Assistant, Secretary/Manager and Assistant Vice-President. He then took a position as a Revenue Officer for the U. S. Treasury Dept. Internal Revenue Services and after two years he transferred to the U. S. Dept. of Labor as an investigator retiring from that position in 1990 after a successful career. During his lifetime he resided in Cleveland, Brewster, Garfield Hts., Ashtabula, Broadview Hts., and lastly in Brecksville, OH. He leaves knowing that he has experienced happiness, sadness and had his 5 minutes of fame numerous times when one of his horses that he bet on would win. His only wish as he now leaves this existence is that his wonderful spouse and his beloved children will never get to the stage of forgetting all the happiness we created for each other. Hoping he has pleasant dreams on his journey. FRIENDS MAY CALL AT THE VODRAZKA FUNERAL HOME 6505 Brecksville Rd., Independence (1/2 mile south of Rockside) on Monday, January 3 from 4-8 PM. Mass of Christian Burial will be held on Tuesday, January 4 at 10 AM at St. Basil the Great Catholic Church in Brecksville. (PLEASE MEET AT CHURCH). Masks required at visitation and Mass. In lieu of flowers, donations may be made to St. Basil Liturgical Fund or a charity of your choice.

The family of Walter P. Wincki created this Life Tributes page to make it easy to share your memories.

A comforting word from you means a lot.

Send flowers to the Wincki family.